Marble shafts 7 feet long were inscribed to mark the longitude and latitude coordinates the government scientists had recently established to calculate the positions of their official eclipse-observation stations around Springfield.

The day of the eclipse arrived and, for whatever reasons, the marble shafts had not yet been erected. This was Springfield. Construction of the new Capitol was under way. Workers had other things to do. The fact was nobody installed the pillars. And so, as the sunny afternoon sky of August 7, 1869 changed to purple, then black, spilling forth starlight upon the Land of Lincoln, the beacon of efficiency that is the Illinois State Capitol building had been established. 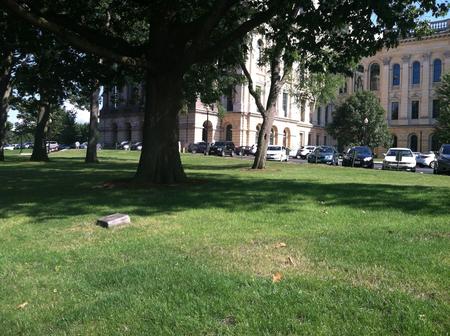 The eclipse truly was a phenomenal sight under perfectly clear skies. Crowds cheered from rooftops, others gasped in awe while all business of the city surrendered under the surreal darkness. The scientists with their instruments tried their best to focus as the moment of totality arrived. Photographic plates were exposed at quickly timed intervals. Falling temperatures were noted and tracked. Sketches were made. Anything of scientific importance—--the color of the sun’s corona, the settling wind, the flash of white light that heralded the return of the sun—--was to be timed, measured and documented as memorable detail for further study. But even a pure scientist’s quest for astronomical understanding falters when the moon passes directly in front of the sun. The astronomers were so overwhelmed by the realization that nothing they were doing could properly describe the experience, all voluntarily added non-scientific confessions and terms to their official reports.

“The spectacle was of an indescribable beauty, and one for which the mind was by no means prepared…” Harvard scientist James M. Pierce included in his Congressional report. “In casually glancing at the bystanders, I was struck by the pallor of their faces, but I have not noted at which [times] I observed this phenomenon.”
“The general effects of the eclipse were extremely grand and impressive,” J.B. Warner of the U.S. Coast Survey reported cautiously to his boss. “The shadows had the cold, unreal appearance of moon-shadows, and the whole effect on the mind was chilling.”

And then it passed. The summer of 1869 continued in Springfield. Construction of the Statehouse resumed but nobody bothered to keep track among all of the construction debris of the marble shafts that were supposed to be posted deep into solid ground as permanent records of the astronomical wonder that was the only total solar eclipse Illinois has ever seen. A decade passed. The Illinois State Register in Springfield took note of the eclipse anniversary by pointing out nobody had actually put those marble eclipse markers into the ground. In fact, the taxpayer-funded monuments were nowhere to be seen.

A search was made among the construction debris of the new Capitol, and within two weeks the 10-year-old shafts were discovered. How the markers were eventually placed on Statehouse grounds is unclear today. The government scientists who had temporarily marked the meridian lines a decade earlier weren’t around. But into the Statehouse grounds the markers went, by someone’s decision.

One hundred and thirty-six years later, the exact spot where somebody in Springfield decided something endures today. Visitors to Springfield should look on the lawn between the Monroe Street sidewalk and the north side of the Capitol. A weathered marble monument, 15 inches square, presumably the top of a 7-foot shaft, is all that remains of the “grand and impressive” spectacle of 1869. The scientists who gathered here to make their meridian calculations all those years ago might dispute the location of this North Meridian Station monument. Doubtless, they would say even words chiseled in stone cannot describe what they actually saw that August afternoon in 1869, the only time the moon has completely covered the sun in Illinois history.

There has not been another total solar eclipse in Illinois since that day.

In 1869 everybody in Springfield knew the August 7 eclipse was coming. Government scientists from the United States Coast Survey and leading universities arrived months in advance to take astronomical measurements and plot out the exact coordinates. Construction of the new Statehouse Capitol had just started, and officials decided to install marble shafts on Capitol grounds to forever commemorate the eclipse and the positions on Earth where scientists observed that monumental moment.

Why We Forget Eclipses 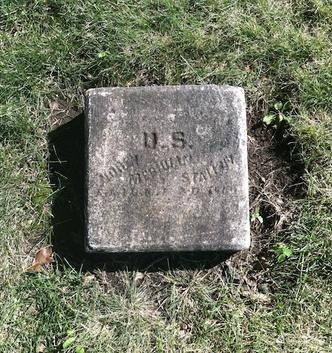